The view of the night sky from Earth is very familiar. On a clear night, you know that you will be able to look into the sky and see the Moon and lots of stars. Sometimes though, the Moon and stars are joined by other objects. If you looked into the sky on an evening early in 1997, you may have been able to see what looked like a star which had been smudged. In fact, this smudged star was a comet, one of the brightest comets visible from Earth for many years. It was named Comet Hale-Bopp and remained visible from Earth for 19 months, being at its brightest and clearest during the first half of 1997.

Comets are balls of ice, dust and gas which travel in elliptical orbits around the Sun. At their most distant, they are invisible. However, when they get closer to the Sun, they begin glowing, forming a coma and tails as dust and gas is burnt off the comet by the Sun's heat. It is only when they have begun glowing that they become visible from Earth with telescopes. This means that they usually only get discovered two or three months before they actually get close to Earth. However, Hale-Bopp was different. it was discovered almost two years before it became a prominent feature in the night sky.

It was a summer's evening in July 1995 when two astronomers in different parts of America happened to be observing the same part of the sky. Alan Hale is a professional astronomer and was working at his observatory in New Mexico on the evening of 22nd July. He was actually observing other comets, but while waiting for one previously discovered comet to come into view, he turned his telescope to a group of stars called M70 (a globular cluster). At a similar time, Tom Bopp, an amateur astronomer at a "star party" (a gathering for astronomers to observe the stars together!) in Phoenix, was also observing the M70 globular cluster. Both astronomers noticed a small fuzzy object in a place where there shouldn't be a fuzzy object. Alan Hale suspected the object may be a comet, but had to check it hadn't already been discovered. He referred to his big comet catalogue and noticing it wasn't in there, he emailed the Central Bureau for Astronomical Telegrams. He returned to his discovery and noticed that the object had moved against the starry backdrop, confirming that it definitely was a comet. He then sent a second email. When Tom Bopp observed the object, he called over some friends. They watched the object move against the stars in the background and, realising he had discovered a comet, Bopp also got in touch with the Central Bureau for Astronomical Telegrams to inform them of this. Because both people discovered the comet at about the same time, it was named after both of them, hence the name Comet Hale-Bopp.

When the comet was discovered, it was about as far away from Earth as Jupiter is. The comet doesn't orbit on the same path as the planets. In the diagram to the left, the orbits of the four inner planets and Jupiter can be seen. The path that Hale Bopp takes can also be seen.. Because Hale-Bopp was discovered when it was so far away from Earth, there was a great deal of anticipation that when it got closer, it would be very bright. Halley's Comet, which last visited in 1986, has a nucleus of 20km. The nucleus of Hale Bopp is 40km, much larger than most comets.

After discovery, the comet continued on its journey towards the Sun. As it got closer, its tail got larger and became easier to spot. On 20th May 1996, Terry Lovejoy of Queensland, Australia became the first person to spot the comet with the naked eye. It would have still been very faint from Earth, but as the months went on, more and more people reported sightings of the comet without the assistance of a telescope or binoculars. Throughout the summer of 1996, Comet Hale-Bopp actually became dimmer, leading scientists to believe that it had fizzled out. However, it began getting brighter again and in early 1997, it was clearly visible from Earth. The comet came closest to Earth on 22nd March 1997 (at a distance of over 122 million kilometres) and closest to the Sun on 1st April 1997. After reaching the Sun and going behind it the comet was thrown back out and continued its journey away from the Sun, becoming less and less visible from Earth. It is estimated that it will return in 2,300 years, in the year 4534! The comet would have last been visible 4,200 years ago. The reason its next visit is sooner than its last visit is because in March 1997, Comet Hale-Bopp passed within the gravitational influence of Jupiter, shortening the length of time it takes to complete an orbit. The furthest the comet will go from the Sun now is 371 AU (Astronomical Units). 1 AU is approximately the distance Earth is from the Sun, so Hale-Bopp will go 371 times as far from the Sun as Earth is. 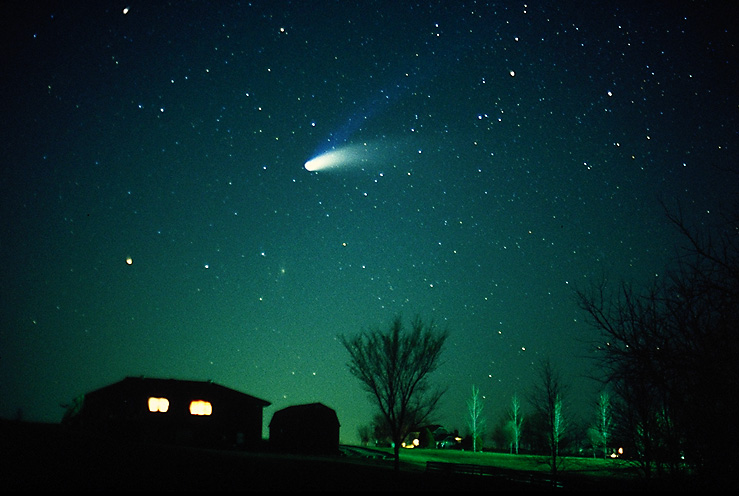 Comet Hale-Bopp spent four months as a regular clear object in the night sky. it is estimated that 81% of Americans saw it, and the comet became the most photographed comet in the history of, er, comet photography. I suppose this isn't such a great claim when you realise that the last great comet was in 1811 before cameras were even invented! The comet was visible from Earth with the naked eye for a record breaking 19 months. The comet was very much a comet of the Internet Boom of the late 1990s. The fast increase in Internet users meant that people all over the world could share information about sightings, pictures, etc. with each other. The original Comet Hale-Bopp website was visited by millions of visitors from around the world. If only this website was around back then - it might have had a visit or two!

Comet Hale-Bopp also had a darker side. Throughout history, comets have been seen as omens; a sign that something was going to happen. An early image of the comet was taken by an amateur astronomer which showed a mysterious object which looked like it was following the comet. This object didn't match up with any stars that should have been in the area, so the astronomer contacted a radio show stating that Hale-Bopp was being accompanied by a Saturn-Like Object. A cult calling themselves Heaven's Gate believed that this Saturn-like object could be a UFO. 39 members of the cult killed themselves, believing that their spirits would be taken to another world by this UFO. That's what happens when you watch too much X-Files! Later analysis of the image proved that the object was in fact a star.

For most of us, Comet Hale-Bopp was simply a once-in-a lifetime opportunity to see a comet. It is now hundreds of millions of miles away from us and has much further to go before it even starts to return to our part of the Solar System. Of course, there may be other comets about to visit us, and some may be even brighter than Hale-Bopp. Comets are mysterious objects. Unless they have been previously discovered and visit regularly (like Halley's Comet), we don't know they exist until they get very close to us. And even when they have been discovered, it isn't until they get even closer that we find out just how spectacular it is.