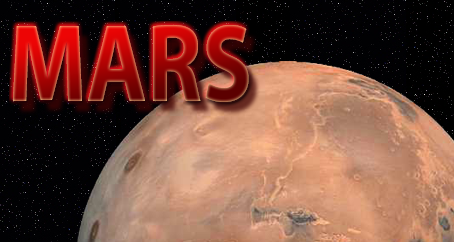 The Moons of Mars 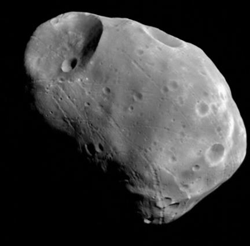 Phobos orbits Mars at a distance of only 9,377 kilometres (5,827 miles). Deimos is further away at 23,460 kilometres (14,580 miles). In comparison, Earth's Moon orbits Earth at 384,400 kilometres (238,855 miles). Mars' moons are also irregularly shaped and very small. Phobos is only 28 kilometres by 20 kilometres (17 miles by 12 miles) . Deimos is even smaller at 16 by 12 kilometres (10 by 7.5 miles). The two moons appear similar to asteroids in the Asteroid Belt, an area of large numbers of asteroids orbiting the Sun between Mars and Jupiter, the next planet in the Solar System. Some scientists believe that the two moons are asteroids that have been captured by Mars and now orbit the planet. It is believed that the meteor that hit the Earth and led to the extinction of the dinosaurs was about the same size as one of Mars' moons. 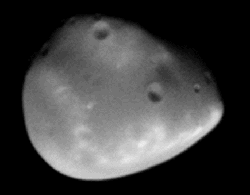 Phobos orbits Mars in about 7 hours, whereas Deimos takes 30 hours to orbit the planet. This compares to the 28 days it takes for the Moon to orbit Earth. Phobos has a huge crater on its surface with cracks from the impact visible. The meteor that hit Phobos must have nearly shattered the moon. In comparison, the surface of Deimos is very smooth, with very few craters from meteor impacts. Then again, if any meteor hit either of Phobos or Deimos, it would be more likely to destroy the moons than create impact craters! It is believed that Phobos is gradually losing its orbit around Mars and that, in about 30 million years, the moon will either be torn apart by Mars' stronger gravity, shattering into millions of fragments and possibly forming a ring system around the planets similar to Saturn's, or the moon will hit the planet. This will leave a huge crater on the planet's surface. Mars will be struck by 'Fear!'