The Formation of the Solar System


Nobody knows for sure how the universe, its galaxies and their many millions of solar systems formed. We do have ways of looking back in time (in fact, every time we look at the Sun, we are looking eight minutes back in time!). This is because it takes light eight minutes to travel from the Sun to Earth. More distant stars may be hundreds of light years away, so when we look at them, we are seeing them as they were hundreds of years ago. However, we are not yet able to look back in time far enough to see how the universe actually began. But, we are able to watch the formation of other stars and know that, millions of years ago, the Sun began its life in a similar way.

Stars are born in swirling clouds of dust and gas called nebulae. The tiny particles, called "matter", of this huge cloud combine with each other, forming a large star at the centre and planets surrounding it. It is believed that the Solar System, with its Sun, planets, moons, comets, asteroids and meteors formed in a similar way. To demonstrate the formation of a Solar System, join me and my dog, Bobsdog, in our Cosmic Kitchen.

Cookery with Bob the Alien

Right, here we are in our Cosmic Kitchen. Today, we're going to make a Solar System. This will only take a few billion years, but I'm sure the results will be worth the wait. Once we've done that, I'll tell you how to make Shepherds Pie.

By now, you should have your very own working Solar System. Eventually, the temperature of your star at the centre of it will burn up and swell into a red giant. This star will become so big that it may swallow some of the Inner Planets of your Solar System, but heat up any Outer Planets. Eventually, you'll run out of gas and the star will cool down, becoming a white dwarf, being smaller and cooler than it was once during its life time. As it cools further, it'll become a black dwarf or, if it was once a supergiant (a supernova), explode, fling out its gassy contents, and become an invisible pull of gravity, or Black Hole, sucking in the mass around it. This means that, once you've finished with your star, it'll vacuum up its own solar system, saving you the responsibility! Below is a picture of the explosion caused by a supernova (a star collapsing in on itself). 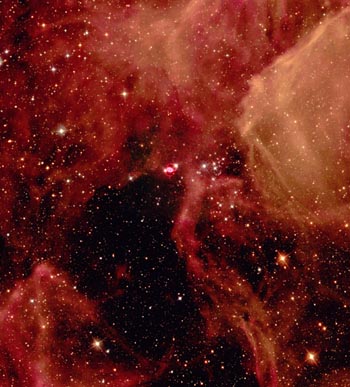