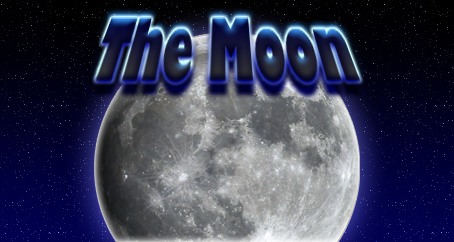 Welcome to The Moon 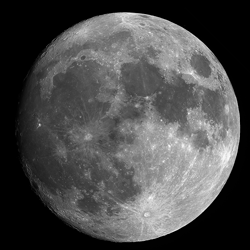 The Moon is Earth's only natural satellite, and is the second brightest object in the sky after the Sun. It is larger than the dwarf planet Pluto, and the fourteenth largest object in the Solar System. Unlike Earth, the Moon's surface is very old, and the craters which are seen all over its surface have been there for billions of years.

From Earth, only one side of the Moon can be seen. This is because Earth's pull of gravity on the Moon is so strong that it prevents the Moon from spinning freely on its axis. Instead, it is pulled around Earth, taking 27.3 days to orbit Earth, and 27.3 days to turn on its axis. There is no wind or underground activity (no moonquakes or volcanic rumblings) to disturb the surface. In fact, footprints left on the moon by astronauts who have walked on its surface will be there for millions of years.

Unlike the Sun, the Moon does not produce its own light. Instead, it reflects the light that it receives from the Sun and only the side facing the Sun received light. As the Moon orbits Earth, the angle of the lit up part of the Moon changes when viewed from Earth. We call the changing appearance of the Moon its phases, and each phase has a name: new moon, waxing crescent, first quarter, waxing gibbous, full moon, waning gibbous, last quarter and waning crescent. Below is a picture of the Moon in one of its crescent phases. 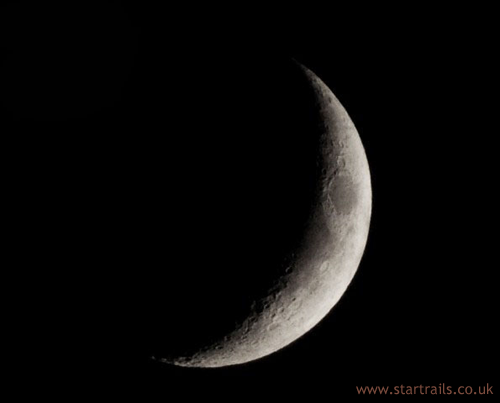 The moon has two distinctive areas visible from Earth. There are light areas and dark areas. The light areas are heavily cratered, rocky, high land on the moon, known as the Uplands. The dark areas are called 'maria'. 'Maria' is the Latin word for 'seas' because it was once believed that these dark areas were possibly seas. They are, instead, smoother, lower areas of land, with fewer impact craters.

The moon is totally dry. Its surface is like a powder. This powder is known as regolith. This is fine dust created from the many meteor impacts. However, recently discovered by a small space-craft called Clementine were areas of frozen water in craters at the Moon's South Pole. This water could be used for future space missions which may use the Moon as a launching pad instead of Earth.

The Moon may have had volcanoes just like Earth still has. Some of the craters on the surface may actually be what is left of volcanoes. The Moon almost certainly had a molten centre at some point in its history, and must have been active once. But, how long ago? Orange volcanic rocks brought back from the Moon are about 3 billion years old. However, the smoother seas (the 'maria') which scientists believe appear this way because lava flowed into it, suggest that some volcanoes happened more recently. The truth is still to be found. Whatever that truth is, the Moon appears dead now. No volcano has erupted for hundreds of thousands of years, and experiments have shown that there are no underground rumbles taking place. But, even though the Moon is geologically dead, it still does things. It causes the sea on Earth to have tides. Tides are important in the formation of coastal landscapes, and bringing warmer water to areas which would otherwise be cold. The United Kingdom is such a mild country because of the North Atlantic Drift, which is water flowing from warmer parts of the world and surrounding Britain. So, the Moon's presence causes activity on Earth.