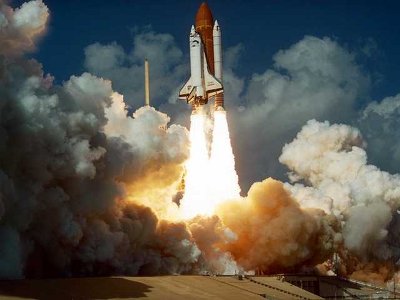 The Space Shuttle was a vehicle used for transporting astronauts into space and back. It is one of the most complex machines designed by mankind and was developed to reduce the cost of space travel and make journeys into space more routine. Since the first shuttle launch in 1981, there have been over one hundred space shuttle missions. There have been five Space Shuttles Orbiters built - plus one test vehicle - with three in operation until they were retired on 21st July 2011.

Before the Space Shuttle, each manned space mission required a new space craft to be built. Most of the components of a space craft was discarded at some point in a mission, either separating from the space craft to return to Earth or being left in space (or in the case of the Apollo missions, left on the Moon) All that was left was a small pod containing the astronauts which would land in the sea when they returned to Earth. By the time of the first manned moon landings in 1969, scientists were coming up with ideas for a reusable space craft for future missions. They believed that in the coming decades, journeys into space would happen much more often, so they needed a vehicle that could be used over and over again.

The Space Shuttle (officially called Space Transportation System) is made up of three parts. The Orbiter itself is the part that goes into space and contains the astronauts and any payload. It looks similar to an aeroplane. An External Tank contains the launch fuel, and two Solid Rocket Boosters which use the fuel from the External Tank to boost the Orbiter into space. Despite looking like an aeroplane, the Space Shuttle is launched with the Orbiter facing upwards. Shuttle launches can only take place if the weather conditions are good at the Kennedy Space Center where they are launched. The weather also needs to be suitable at a secondary site in case the shuttle needs to return to Earth shortly after it is launched. Once the shuttle is in the air and on its way to space, the External Tank and Solid Rocket Boosters separate from the Orbiter and parachute back down to Earth, landing in the sea. If they look like they may hit land, they can be destroyed remotely before landing. The Solid Rocket Boosters are recovered as these can be used again, but the External Tank is not reusable. All Space Shuttle missions take place in low Earth orbit. This means that the Orbiter stays fairly close to Earth when in space. The Orbiter is not designed to go to the Moon or other planets. Typical missions include taking astronauts, provisions and parts to the International Space Station, doing experiments while in the weightlessness of space, launching satellites and space probes and repairing old satellites in orbit around Earth (such as the Hubble Space Telescope). The Space Shuttle Orbiter can carry up to 11 astronauts, although most missions carry about 7 astronauts. At the end of the mission, the Orbiter drops out of its orbit around Earth, and falls into the atmosphere upside-down. Once it enters the atmosphere, it flips over and plunges through the atmosphere. As it falls, the temperature outside the Orbiter reaches over 1,500 degrees celsius. Heat absorbent tiles cover the Orbiter which prevent it from overheating and burning up. When it is about 7.5 miles from landing and at 10,000 feet in the sky, the Orbiter is slowed down and glides to its landing site. The landing itself is controlled automatically by computer, although this can be overridden if necessary (which has only been done once). The Orbiter touches down on the surface like an aeroplane. Most often it will land back at the Kennedy Space Center where it launched, but if this isn't possible, it will land somewhere else. NASA tries to avoid this as, because the Space Shuttle isn't actually designed for flight while in Earth's atmosphere, to get it back to the Kennedy Space Center, it has to hitch a lift on top of a specially designed aircraft, adding an extra one million dollars to the cost of the mission!

The Space Shuttle was developed during the 1970s and the first Orbiter to be completed was Constitution in 1976. However, Star Trek fans wrote to the White House and requested its name to be changed to Enterprise like the spaceship in Star Trek! The Star Trek fans succeeded and Consitution was renamed Enterprise. Enterprise didn't boldly go where no man had gone before. In fact, it never even went into space. Instead it was used as a test vehicle and tested gliding and landing while in the skies of Earth. The first fully operational Space Shuttle was Columbia. NASA received this shuttle at the Kennedy Space Center on 25th March 1979. It took off for its first mission two years later on 12th April 1981. Columbia was joined by Challenger in 1982, Discovery in 1983, Atlantis in 1985 and Endeavour in 1991. Sadly Columbia and Challenger were both destroyed in accidents; Challenger shortly after launching on 28th January 1986 and Columbia shortly before it should have landed on 1st February 2003. All crew members on both missions lost their lives. Challenger was destroyed because of an o-ring failing to seal in one of the solid rocket boosters, partly due to the record low temperatures in Florida at the time. Columbia disintegrated due to overheating after foam insulation peeled off the External Tank during launch on 16th January 2003. This punctured the wing allowing hot gases to enter the shuttle when it re-entered Earth's atmosphere 16 days later. After both disasters, all Space Shuttle missions were stopped while the accidents were investigated. The first mission to take place after the Challenger disaster was in September 1988 and the first mission to take place after the Columbia disaster was on 26th July 2005. In both missions, Discovery was the Orbiter that was used. However, during the Discovery launch in 2005, foam insulation peeled off the External Tank again. Although it didn't cause any damage and the Orbiter returned to Earth safely, it meant that another mission wouldn't take place for almost another year because of concerns about safety. Discovery launched again on 4th July 2006 and was followed by two further missions that year. 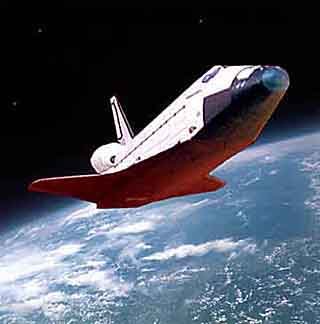 In 2011, the fleet of the three remaining Space Shuttles will be taken out of service to make way for a new, more advanced vehicle for space travel. It is expected that in the years up to 2011, there will be about four Space Shuttle missions a year, mainly to complete work on the International Space Station. Replacing the Space Shuttle will be a shuttle called Orion. This vehicle is expected to make its first launch in 2012, initially going to and from the International Space Station. However, Orion will also be used to take man back to the Moon after 2015, the first time anybody has been there since 1972, and it is hoped that it will also make the first manned mission to Mars.

Opinion is divided about how successful the Space Shuttle has been. Its reputation has definitely been tarnished by the two disasters it has experienced. Costs of space travel haven't been greatly reduced, and journeys into space haven't taken place as often as people thought they would. Each Orbiter was designed with a life span of 10 years in which it would complete 100 missions. Instead, by the time they are retired, they will be between 20 and 30 years old but will each have completed about 35 missions. Some people even think that the Space Shuttle was a kind of step backwards. Whereas at the end of the 1960s and beginning of 1970s, man was exploring other worlds (the Moon), the Space Shuttle has resulted in all manned missions taking place in low Earth orbit, with no funds being available to send people further afield in other vehicles. However, without the Space Shuttle, satellites like the Hubble Space Telescope couldn't have been repaired in 1993, and again in 2007, and construction of the International Space Station would have been much more difficult. The Space Shuttle is a highly complex machine and is a true demonstration of human ability and will be remembered as the first step in regular manned space travel.