At the centre of the Solar System is a gigantic ball of gas. This star is known as the Sun and generates all of the heat and light in the Solar System. In a galaxy, there are billions of stars, and in the universe, there are countless numbers of galaxies. This means that there is an unimaginable number of stars throughout the universe. Some stars are older than others, some don't shine any longer, and some stars have not even been born yet. Some of the stars that we can see in the night sky don't even exist any longer! 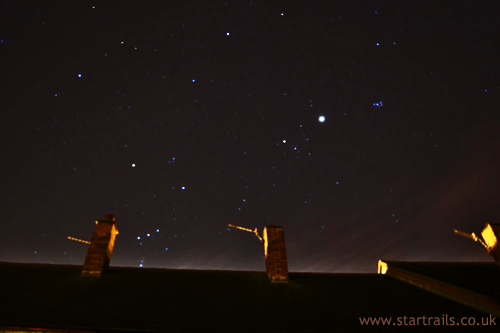 A star is born in a cloud called a nebula. This cloud is full of very small gas, dust, rock and water particles. All of these particles collide with each other in this swirling cloud to form a Solar System. Most particles gather at the centre, heating up to form a star, and particles spinning in the cloud around the star combine with others to form planets, moons and asteroids. For the full instructions of how to make your very own Solar System, click here.

The main gas in a nebula is hydrogen, and this makes up most of the contents of a star and many other large planets. Stars create their heat, light and energy by a process called thermonuclear fusion. The hydrogen in a star is turned into helium. This process results in a release of huge amounts of energy. It is also the idea behind the hydrogen bomb used in warfare on Earth. Basically, to create energy, two hydrogen nuclei (deuterium and tritium) fuse together to form a helium nuclei. This happens at temperatures of 10,000,000°c at the centre of the a star. It is this helium nuclei which causes the burst of energy which, in turn, creates the heat and the light of a star.

Stars come in many different sizes. The size of a star can be affected by its internal heat or its age. For example, when the Sun gets older, it will expand so much that the four Inner Planets, Mercury, Venus, Earth and Mars, may be swallowed up by it. A hot star is also brighter, bigger, but uses its supply of hydrogen quicker so that it dies sooner than cooler stars. Stars are also different colours. The Sun is a yellow star, although stars can also be red, white, blue and orange. Again, a star's colour will depend on its age, size and temperature.

Most stars are billions of kilometres away from each other. The nearest star to the Sun, Proxima Centauri, is 40,660,000,000,000 kilometres away! This is equivalent to 4.28 Light Years. This means the light from Proxima Centauri takes 4.28 years to arrive at Earth, meaning that, when you look at Proxima Centauri in the sky, you will see it as it was just over 4 years ago. In comparison, the Sun is 8 light minutes away from Earth, meaning that when you look at the Sun, you are seeing it as it was 8 minutes ago.