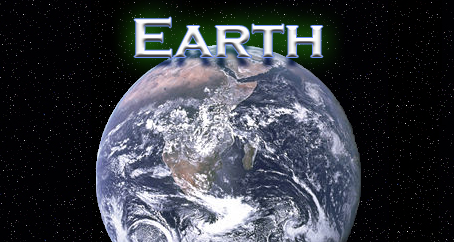 Welcome to Earth
Why is there life on Earth?
How did Earth form?
A Year on Earth
Earth's Visitors from Space
10 Facts about Earth 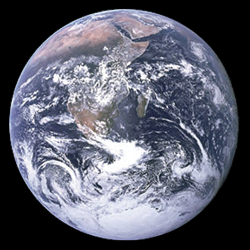 Earth is the third planet from the Sun and the largest of the four Inner Planets. It is the planet that you live on and is special because it is the only place in the whole Solar System known to support life. It is in the perfect position in the Solar System - not too close to the Sun and not too far away - meaning that it has the right climate for life to exist - not too hot nor too cold. It also has plenty of water, a key ingredient for all living things. In fact most of the Earth's surface (70% of it) is covered by water. Surrounding the planet is a layer of atmosphere which prevents most of the Sun's poisonous rays from reaching the surface. This atmosphere also contains oxygen which many animals (including people!) need to be able to breathe. A magnetic field also protects Earth.

Earth is a planet which orbits the Sun every 365 and a quarter days, taking 23 hours and 56 minutes to turn on its axis. This is the reason that a year is 365 days long and a day is 24 hours long. It has one Moon which orbits the planet every 27 days. It is a geologically active planet, meaning that its surface features and landscapes are constantly being reformed by volcanoes, earthquakes, changes in climate (temperature), and weather. Like other planets and moons, it is a target for asteroids and meteorites travelling through space. Most of these objects burn up in the planet's protective atmosphere, although some do survive and leave huge impact craters. For thousands of years, people believed that Earth was at the centre of the universe and that everything else - the Sun, the Moon, the planets and the stars - span around it. It was only about 500 to 600 years ago when astronomers were able to prove otherwise, and it finally became accepted that the Sun was at the centre of the Solar System and that Earth orbited it.

The planet, like Mars, has ice caps at both of its poles. These are huge areas of frozen water which, if they were melted, could flood the planet. These polar ice caps are caused by the planet's axis having a slight tilt, meaning that they spend large parts of the year receiving almost no sunlight or heat. This tilt also causes the seasons on the planet. Mars is similar to Earth in this way, being a planet with a similar tilt.