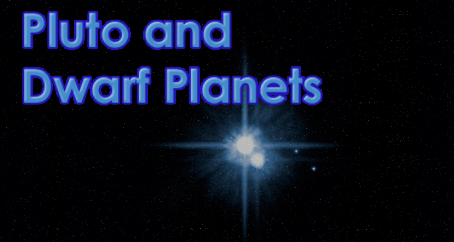 All dwarf planets are smaller than all of the regular planets in the Solar System. The most famous dwarf planet, Pluto, is smaller than Earth's Moon, and half the width of Jupiter's moon, Ganymede.

Dwarf planets orbit on a different plane than the other 8 planets, going over them and below them.

The orbits of dwarf planets are elliptical, meaning that they are more oval than round. Pluto can sometime come closer to the Sun than Neptune, but then go almost two billion kilometres further away from Neptune's orbit. In the picture below, you can see Pluto's orbit (in grey) and Neptune's orbit (in blue).

Pluto is the planet with the lowest pull of gravity in the Solar System. This will explain why its moon, Charon, orbits the planet so closely (at a distance of 19,640 kilometres).

One of Pluto's moons, Charon, is not much smaller than Pluto itself. No other moon is as close to the size of its planet as Charon is to Pluto. (Pluto is 2,270 kilometres wide, Charon is 1,207 kilometres wide).

New Horizons was a space craft that launched in 2006. Its mission was to fly past Pluto and its moons which it did in July 2015. When it was launched, Pluto was still recognised as a planet and was the only one not to have been visited by a space probe. Pluto lost its status as a planet in summer 2006, so New Horizons can no longer be recognised as the mission to visit the last planet in the solar system. The mission to be credited with that is Voyager, as Voyager 2 reached Neptune in 1989.

Pluto was the only planet to have been discovered in the Twentieth Century, even though it is no longer recognised as a planet.

Nobody knows what the atmospheres of Pluto and the other dwarf planets contain, or even if they have any atmosphere. Any atmosphere is most likely to contain nitrogen.

Pluto's moon, Nix, is named after the Greek goddess of darkness and night. But, in Greek mythology, her name is spelled "Nyx". To avoid getting the moon confused with an asteroid which has already been called Nyx, and because they couldn't be bothered to think of another name, the International Astronomy Union (the people that give planets and moons names) changed the spelling to "Nix", taking the Egyptian spelling of the name.

View facts about other destinations