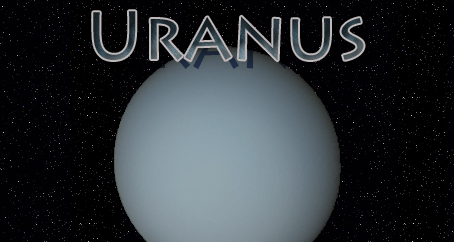 All planets in the Solar System rotate on an axis. An axis is like an invisible line running through the centre of a planet, the top of it being its north pole and the bottom of it being its south pole. It is like putting a cocktail stick through a ball and spinning it round.

The axis of most planets is actually tilted. Both Earth and Mars have a tilted axis of about 23 degrees. This is what causes these two planets to have seasons. Uranus also has a tilted axis, but it is so tilted that it rotates on its side, as if the planet has fallen over! Scientists believe that this could be because an object about the same size as Earth, hit Uranus and knocked it over at some point in its distant history. It causes the planet to roll around the Sun in its orbit like a barrel, and its moons, instead of going from left to right around the planet in their orbits, to go over the top of it and under. If we could see the moons orbiting Uranus close-up, it would appear like the lights on a ferris wheel.